INVEST IN CHINA: THE SECRETS OF SUCCESS

An online interview between Javier Gimeno and CGTN French channel 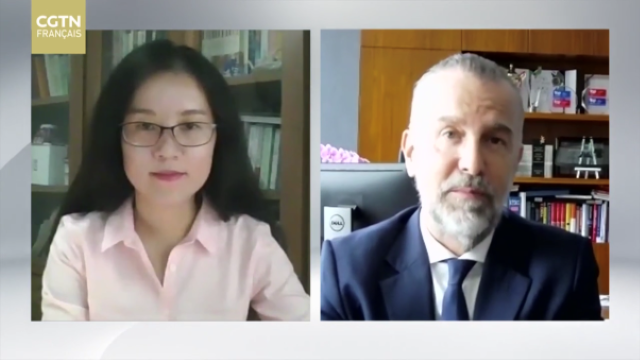 Javier Gimeno, Senior VP of Saint-Gobain Group and CEO of Asia-Pacific region, has been working with China for over 20 years and shares with us some advice on how to successfully invest in China. He emphasizes the great progress made by China in terms of Intellectual Property protection and warmly advises adopting a positive attitude – for him essential – to build transparent and trustful partnerships.

Journalist: Hello. How to ensure successful investments in China is an eternal question for any investor. Today, I will try to give you some advice and for that we will exchange with Mr. Javier Gimeno who has been working in China for over 20 years. Mr. Javier Gimeno is Senior VP of Saint-Gobain Group and CEO of Asia-Pacific region. He is also the former President of the French Chamber of Commerce and Industry in China and for 20 years. He has been working with many Chinese partners. Mr. Gimeno will advise us on the mind-set to adopt when you are a foreign investor coming to China. So Mr. Gimeno, which mind-set shall an investor absolutely avoid when he comes to China for the first time?

Javier: First of all, I would like to say that usually, people who are willing to invest in China adopt a very positive attitude towards China. This positive attitude mostly results from a kind of fascination for this country. Being said, it is also true that very often, the ones who have never lived in China and don’t know much about China have some prejudices and preconceptions. For instance, this preconception of being extremely careful and mistrustful toward Chinese investors, because of their lack of transparency of their objectives and final goals, is a very widespread idea. The preconception if you come to China you take the risk of having your technologies stolen is also a very common thought. And finally, among those who don’t know China and who are coming for the first time, I observe certain arrogance. Believing that Chinese partners have less experience and professionalism than those in other western countries, like Europe or the US.

Journalist: Mr. Gimeno, you were talking about the risk of having technologies stolen in China. I do believe it’s a widespread prejudice. So what did you experience in China and what is the reality today?

Javier: I believe today, China has made a lot of progress regarding the protection of Intellectual Property. I feel extremely safe regarding that matter. As you know, Saint-Gobain implemented almost 20 years ago a R&D centre in Shanghai. We are used to developing and creating new products and technologies in this country. For the past 20 years, I never had a single issue regarding Intellectual Property or any case of stolen technology in China. It is indeed a very widespread preconception that, in the past, could reflect a certain reality. 20 years ago, China didn’t have a such a developed legal system to protect the Intellectual Property as we have now. But for the past 10 years, China has made huge progress and can benefit from a system that has reached very high standards and among the best in the World. So today, we are not facing a higher risk in China than in any other country in the World.

Journalist: You have been dealing with a lot of local partners during your career in China. What is the mind-set to adopt when you are negotiating with Chinese partners?

Javier: You definitely need to go with a very positive and transparent mind-set and show trust. Most of the time, Chinese partners value more the personal engagement and commitment than the contract signed, which is hard to understand for foreign investors. So you need to adapt and do business in China in the Chinese way. Foreign investors have attached a lot of importance to the personal relation, expressing his trust toward his partners, respecting and treating his partners as such. The least you can do is to develop a very transparent relationship with complete trust.

Journalist: Do you think we can find some complementarity?

Javier: You cannot put everything you have been negotiating into a formal contract. It is better to move forward in a trusted relationship and to build a real partnership which will soon lead you to some agreements. Then, you will have time to go through details and formalize. But usually (in western countries), you want to formalize everything in every detail. And then you believe that based on that very detailed contract you can build a trustful partnership and friendship. No! In China, it is the opposite.

Journalist: I am very curious because in Europe for instance, you also need trust to sign a contract?

Javier: Yes, of course. But I am here talking about foreign investors who come for the first time to China and are not used to dealing with Chinese partners. They don’t know the mind-set and culture of the country. But of course, trust is essential in China and elsewhere. A European will feel more comfortable and inclined to share his trust when he has in front of him another European partner with a similar culture. On the contrary, when it is a European who never came to China and doesn’t know the culture, with the language barrier and so on, he will be more cautious.

Journalist: So we must be well prepared before coming to China?

Javier: Absolutely. You have to forget all those prejudices and preconceptions I mentioned earlier. Do not come with this feeling of fear regarding risk of technology theft. This is not China. Honestly speaking, I am in China for many years and I have never experienced any swindle or theft or anything like. I have always had very good partners in China. Of course you can have some issues sometimes but we have always found a solution. You need to be very pragmatic and Chinese people have very pragmatic mind-set which helps a lot to solve issues. Chinese are extremely pragmatic. You will always find a solution.

Journalist: So we need to relax?

Journalist: Thank you very much Mr. Gimeno. Thank you for all the very useful advice.

Javier: Thank you for inviting me.