Saint-Gobain SA, the French industrial conglomerate, plans to open at least 10 plants during China’s 14th Five Year Plan period (2021-25) to ramp up its production capacity in China, in order to meet growing demand, one of its senior executives said.

China’s rapid urbanization, modern manufacturing and a vibrant services sector are all massive growth opportunities for foreign firms as well as domestic companies. This is true for high-end plastic products, sustainable construction materials and automobile components, as well as for the company’s broad spectrum of upstream suppliers and downstream clients, said Javier Gimeno, group senior vice president and CEO of the company’s Asia Pacific operations.

Earlier this month, the company added a new production line to its performance plastics plant in Hangzhou, Zhejiang province. It will manufacture single-use products for biopharmaceutical processes. In 2021, the La Defense Cedex-headquartered group will open two more factories to produce calcined gypsum in Yangzhou, Jiangsu province, and Huzhou, Zhejiang province. 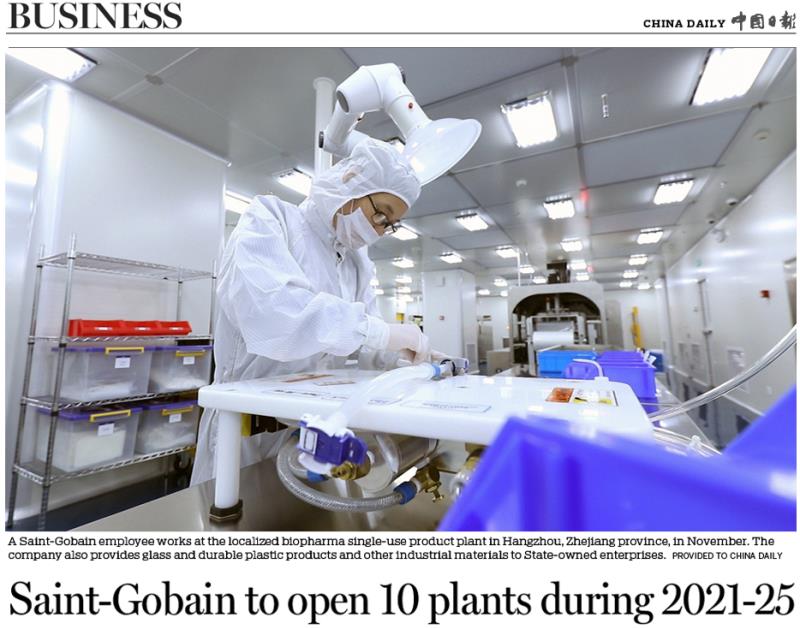 “China has recovered from the COVID-19 pandemic in an exceptional manner. We have seen the quick recovery of the Chinese economy and the many industries that we serve. In our segment, the Asia Pacific region has remained largely positive in the third quarter, driven by the continued strong demand in China,” he said.

As the country designs its development blueprint for the next five years and beyond, and drives its dual circulation development pattern, Saint-Gobain looks forward to exploiting the new opportunities arising from China’s sustainable growth, he said.

Known for the durable quality of its output, Saint-Gobain provides glass and durable plastic products and other industrial materials to China’s State-owned enterprises such as Commercial Aircraft Corporation of China Ltd and China Railway Rolling Stock Corp.

Gimeno said the pandemic has focused many companies’ attention on deploying more capital to healthcare and related businesses.

“Our business growth in China is linked with the development of the Chinese society and the growth of China’s middle-income earners, who are more demanding, in terms of quality and performance of products, and are as demanding as their counterparts in the US and Europe,” said Gimeno.

The Spaniard said he has been living in China with his family for a decade and received his permanent resident card in January. In October, he received the Shanghai Magnolia Gold Award, which recognizes foreigners who have made outstanding contributions to the social and economic development of the city.

China will remain a competitive supply chain choice for Saint-Gobain, he said, adding the company is looking forward to greater investment and development in research and development, production and sales. It has great expectations for continued recovery of China’s economy as well as the continuous improvement of China’s business environment.

Experts said European companies’ investment in China is set to grow in the fourth quarter of 2020 and through 2021, as China and the European Union have accelerated negotiations on the China-EU investment treaty. China’s fast-growing digital economy has sharpened the country’s competitive edge in industry and created favorable conditions for global companies to invest in more fields.

In addition to having supply chains that are reliable and less vulnerable to disruptions, China has the advantages of economies of scale, consumption potential, and competitive labor costs. This makes supply chains scalable, extendable and cost-effective, said Zhang Xiaoqiang, executive vice-chairman of the Beijing-based China Center for International Economic Exchanges.

For both Chinese and global companies, the operational experience, new technologies and solutions gained this year will be useful to develop the market after the epidemic, in particular in areas like smart city, 5G infrastructure development, artificial intelligence, the internet of things, biomedicine and civil aviation,said Sun Fuquan, vice-president of the Beijing-based Chinese Academy of Science and Technology for Development.