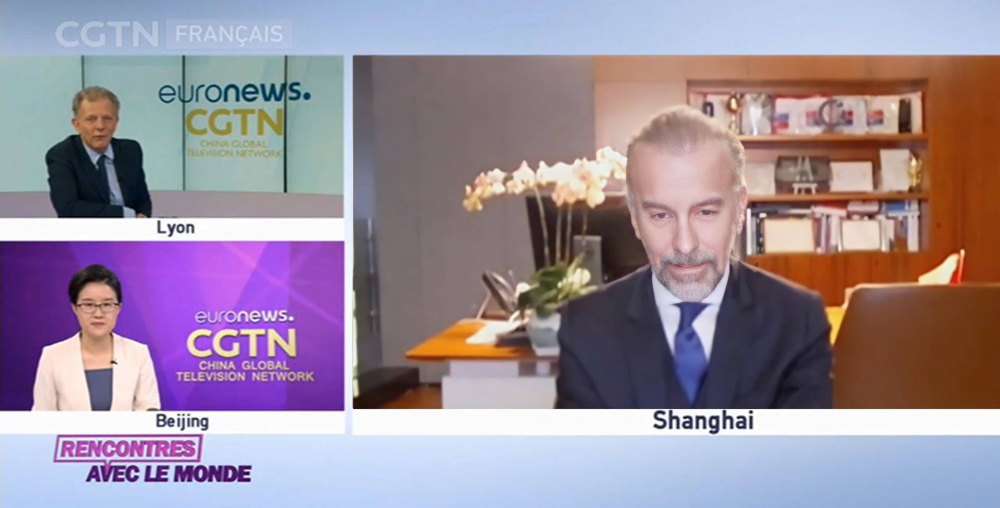 What are the trends in the relations between Europe and China during this particular time?

The relations between China and Europe are going in the right direction even if due to the pandemic situation and also due to the Sino-US commercial war, we see that China has found, in its domestic market, a very good growth lever. Regarding overseas trade, when you look at the number of the past 9 months you will notice that most of the China growth has be done with the other countries of Asia. So clearly the attention is on China domestic market and foreign trade with other Asian countries.

The European Union Chamber of Commerce in China has published its annual report this year entitled: “Navigating in the Dark”. Mr Gimeno, you lived the pandemic situation here in China and your company is in China. Today, how is China going? In which mind-set are entrepreneurs in China?

I believe that China is doing well. When you look at the numbers for second and third quarter, the growth is positive and acceleration. Furthermore, when I look at my company and how our markets evolve (as well as other markets) in China, we can tell that since the month of April we are in term of activities at the same level of 2019 and since the summer, we enjoy quite a dynamic growth. So in China, all in all 2020 is a rather good year and certainly much better than the majority of other countries in the World.

Are companies navigating into the dark?

I do not believe so. The European Chamber of Commerce in China said that but I do not share their point of view. I believe that the trend in China and for the European companies operating in China is very positive for the past few months. Being said, we don’t really know how long this phenomenon will last as we have not such a good visibility regarding how deep and in which extent the crisis will be in the rest of the world.

It is true that China might be impacted by the crisis in US or Europe. But once again, I note that the interior market is extremely dynamic. It is pushed by many growth levers that are extremely important and structural and which are part of the transformation of the China economic model.

I do not think we navigate in the dark and I am not an isolated position. I belong to several forum and groups with other CEO and today China is well oriented despite the uncertainty of world trade. There is a strong willpower of China to turn towards its local market whatever the situation might be the rest of the world, and this local market will push China economic growth.

We need to pay tribute, in a positive way, to the recent common commitment towards carbon neutrality and the objectives settled in a long term. Europe plan to reach its carbon neutrality by 2050. Now we need to articulate those ambitions into actions and I believe that in that matter, regulation and law have an important role to play. There are measures that must be applied everywhere in the world to reach this objective of decarbonisation. One of these regulations is the Carbon Tax. We would need that carbon tax to be adopted globally and in a very harmonious manner so that the carbon tax doesn’t become a factor of inequality in term of competitiveness between companies operating in different geographical zones.

I believe that there are important fields such as construction, renovation, sustainable mobility etc. for which the technology exists and is ready to significantly reduce the emissions of greenhouse gas. To do so we need new norms, consistent ones and applied globally. Today, one tier of the emissions of greenhouse gas comes from the usage of buildings. If China and Europe decided to adopt more exigent regulations and norms for the usage of some products and technologies, we could reduce greenhouse gas emission by almost 60%! So consistent and global regulation is a fundamental tool to move towards decarbonisation without creating an imbalance in term of competitiveness between companies operating in both regions.

Any advice for companies willing to come to China?

I have three advices :

Don’t we need a balanced and stable relation between Europe and China and are we going in that direction?

Yes I believe that we are going in that direction. There were some imbalances in term of competitiveness which are gradually eliminated. We were talking about environment earlier, the fact that China committed and launched regulations toward environment rebalances the conditions of fair competition. TheEuropean companies have higher standards in term of environment which were not the case of Chinese companies. This created differences in term of cost of production. It is the same with manpower costs: China growth has as positive consequence the prosperity of the country and then reduces the salary gap between both regions. Added to that, China is drastically transforming its economic model, economic model that was based on volumes and which now and for many years already is more oriented towards quality, technology, innovation and upgraded production.

So now, we are in a field where competition is more balanced and in which we will have to use our best weapons: creativity and innovation. Nobody can say anymore that Chinese companies beat us because they enjoy better conditions than European companies. It is a saner competition but much more intense. We won’t be in a model where decision is made based on the selling price but based on competitiveness, creativity, technology and innovation. The game rules are completely changing and the game field in changing too.