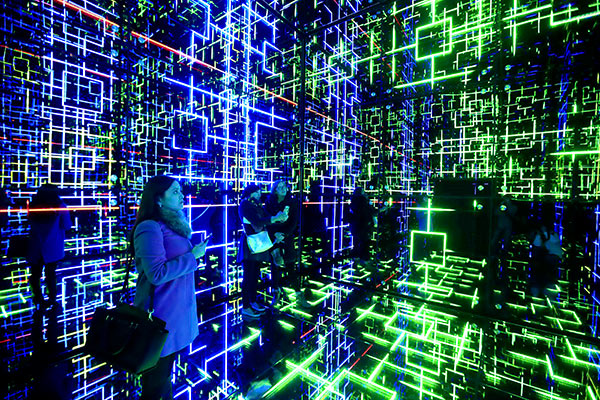 Visitors at the Oh! Future Sensation exhibition in Shanghai, which is part of Saint-Gobain's 350th anniversary celebrations.[Photo/Agencies]

French construction materials company Saint-Gobain SA is looking to double its sales in China over the next three to five years, according to its Asia-Pacific chief.
"China is a very important market for Saint-Gobain. It currently represents 4 to 5 percent of Saint-Gobain's global sales, which is still a small percentage compared to the importance of the Chinese economy in the world," said Javier Gimeno, chief executive officer of the company's Asia-Pacific operations.
"Our mission is to double our presence in China in the coming three to five years, and we are in the process of achieving this goal," he said.
The company has been operating in China for three decades, and aims to become a major player in habitat and construction materials, especially glasses and mortar.
Saint-Gobain currently employs about 9,000 people in China. In 2016, it made revenue of over 1.15 billion euros ($1.37 billion).
The company has more than 200 engineers at its Shanghai research and development center to create new products and solutions tailored for the Chinese market.
There is strong determination from the Chinese government for innovation, R&D and automation, as well as a strong desire to ease market access for foreign companies, which presents huge opportunities for French enterprises, according to Gimeno.
"As French companies, we feel more comfortable where there is a high demand from consumers than it was in the past when only low-quality products produced at very low cost matter," he said.
Gimeno, who is also the president of French Chamber of Commerce and Industry in China (CCI France Chine), is optimistic about the prospects for French enterprises investing in China.
"The Chinese market is much richer than it was before. In the past, you could sell any product in China with very low level of quality and performance. Today it is no longer the case," he said.
The development of French businesses in China is linked with the development of the Chinese society and the growth of China's middle classes, which is more and more demanding in terms of quality and performance of products, and are as demanding as their counterparts in the US and Europe, according to Gimeno.
"Since it was founded in 1992, CCI France Chine has offered a new channel for French enterprises to expand their visibility and influence in China," said French Foreign Minister Jean-Yves Le Drian.
"Today, it has become the first step for French enterprises to enter the Chinese market," he said.
"French enterprises should strengthen their cooperation with Chinese partners to solve the challenges facing Chinese society today, such as environ-mental issues and an aging population," he added.
In the first 10 months of this year, China's total trade volume with the European Union increased by 16.2 percent year-on-year to 3.4 trillion yuan ($515.1 billion), making it the country's largest trade partner, according to data from the General Administration of Customs.